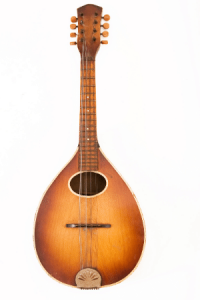 If you have an interest in learning bouzouki and mandolin, this article is for you.

The mandolin and bouzouki are quite similar but differ mainly from the shape, strings, sound and octaves.

When you go to music school locally, or you enroll only, or you want to self-train using music sheets, the fact remains you are a beginner.

So, before you start learning how to play both instruments, you need to carefully study their differences and start the one that is easier to learn.

The Differences Between The Mandolin and Bouzouki

When the steel strings are plucked, they create a sharp metallic sound close to the one coming from a mandolin, but with a lower pitch.

Mandolin has 8 strings arranged in 4 courses, just like the tetrachordo bouzouki. Mandolin strings are made of alloys of phosphor and bronze. The type of alloy determines the quality of the string, and so is the sound produced.

So the different materials making the strings make the instrument versatile for use in various events.

Mandolin is a musical instrument with a 14-inch scale that is tuned GDAE, all paired in double courses. For bouzouki, it is a 25 scaled instrument tuned with just an octave below the mandolin. Double coursed too, bouzouki has the bottom two string pairs in octaves like a 12 stringed guitar with the upper strings in unison. Learn more about guitars and mandolins.

An octave mandolin tuned GGDDAAEE, which comprises a 21 or 22-inch scale, is also an octave below a typical mandolin. However, courses are in unison too it is true to say that both bouzouki and mandolin are tuned similarly, but the technique of playing them is unlike because their scales are not the same.

From the construction point of view, various bouzouki has differences not only in the number or types of strings but also other features like width, height, neck length, and other body parts of the body.

The construction variation is done by manufacturers who have experiences and want a given tone of the sound, whether deeper or heavier.

Any resonating body, the timbre is determined by the type and size while the neck length and strings determine the pitch of the sound produced by the instrument though to some degree, influences the timbre. Most bouzouki has 25 to 27 spaced frets on a chromatic scale with 12 tones of equal temperament.

Mandolin being necked box lutes; two main types include a curved top mandolin and flatback mandolins. The strings in mandolin are suspended over the soundboard and the neck then passes over a floating bridge.

The bridge remains in contact with the soundboard due to downward pressure exerted by the strings. The neck is either flat or has a slight radius with frets covering. It is the action of the strings that causes vibration and hence the sound.

Holding and Positioning The Instrument

All the information on holding either the mandolin or the bouzouki is for the right-handed instrument and right-handed player; left-handed will need to have reverse instructions. Holding a bouzouki is not accessible due to its round, smooth, easy to slide back.

You should play bouzouki seated down while your right foot raised like 15 cm and left foot on the ground. So rest the instrument on your lap while the neck extends left upward at around 30 degrees.

For mandolin, when playing, you should sit upright with the instrument resting on your lap at around 45 degrees. The instrument Neck should cradle between the index finger and the thumb. Your palm should be close to the neck and back.

Bouzouki cost from around $100 to $1000 while mandolin costs about the same. The bouzouki is more expensive to buy. This makes it not the first choice for beginner learners. So if you were to think of the best instrument to learn first, it is advisable to go for mandolin which you can buy with as low as a third of the minimum cost of the bouzouki.

Bouzouki is a long-necked plucked lute that emanated from Greece in 1950. The instrument has a round wooden body that appears more like a mandolin comprising metal strings organized in three to four double courses over the fingerboard with frets.

Bouzouki also spelt as buzuki was traditionally an instrument for playing during social gatherings.

Just like the bouzouki, a mandolin is also a plucked instrument that has roots in Europe. Its predecessors such as gitten and mandola or mandore coming from Nepal, Italy, around the 17th and 18th centuries.

It is also a highly appreciated short-handed instrument from the lute family, too, just like the buzuki. Therefore both bouzouki and mandolin belong to the same lute family.

Which One Is Easier To Play?

Although mandolin may sound a bit too bluegrassy and is a bit hard to press, it is easier to play than bouzouki. The Bouzouki has a long stretched frets, mainly the greek style, which makes it hard to play through sounds better. Mandolin has a shorter neck and hence with close frets.

Click here to learn how hard it is to play the mandolin.

This article explains that both bouzouki and mandolin are a great instrument with so much in common.

However, with the few differences, it is easy to point out the easier to play and most affordable, which hence pointing out the first pick as a beginner is easy.

Learn about the differences between the ukulele and mandolin here.

Finally, it would be recommendable if you start learning mandolin first, then you can smoothly switch to bouzouki reason being mandolin is affordable and easier to play.

Mandolinmasters.com is a participant in the Amazon Services LLC Associates Program, an affiliate advertising program designed to provide a means for us to earn fees by linking to Amazon.com and affiliated sites. As an Amazon Associate I earn from qualifying purchases. Amazon and the Amazon logo are trademarks of Amazon.com, Inc. or its affiliates.