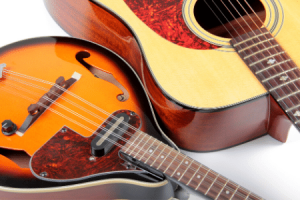 Many people around the globe assume mandolins and guitars are similar because they are both stringed instruments. If you are a beginner who wants to venture into the art of playing either or both mandolin and guitars, you should first get out of common misconception about them.

Before you take practical lessons on guitar or mandolin playing, first understand the differences between the two-stringed instruments.

Mandolins are not guitars, nor do they come from the same musical family. They have both output and physical differences that are briefly covered in this article.

Here is a quick video if you’re in a hurry.

Difficulty: Which One Is Easier?

Guitar is probably easier to play than the mandolin. But that doesn’t mean you can’t learn.

If your fingers are small, it can be difficult to play mandolin because you will need to hold the strings with both hands, and this will delay you when learning. For those with large fingers, however, it will be easy to squeeze the fingers to the right holes, and also smaller fretboards will cause issues to them.

Although mandolins are said to have eight strings, and they are paired to four. For guitars there are six single strings, the theory goes, the more the number of strings, the harder to play the instrument.

Mandolins are harder to play because a player needs to get used to double string which is not easy to manage. To sum up, the guitar is the easier first choice for beginners.

Differences Between The Guitar and Mandolin

The mandolin is an eight-stringed instrument that descends from the lute family. They were created when lutes were noble, and players with mandolin skills were seen like talent lords.however, the incision and rise of guitar and other stringed instrument paced the popularity of lutes during the end of the baroque period.

Guitars are today’s most popular instrument as they are the absolute definition of modern-day music genres. Guitars emanated earlier than mandolin around 16th century. There has been a lot of changes in the number of strings a guitar has, where earlier guitars had 4 courses like a mandolin, but today we have guitars having six single strings instead of courses.

The growth of guitars’ popularity from 16th to replacing lutes in the 18th century did not end there until the 20th century and guitars became a common household name.

Apart from a bass guitar, typical guitars have six single strings while a mandolin has 8 strings paired to 4 courses. Most beginners fear mandolins because the double strings are challenging to make a note. The good thing with mandolins strings is that they are thinner just close to one guitar string, and also their nearness to each other makes them feel like one.

The mandolin strings are fixed tight with lager tension as compared to guitar strings. This makes beginners feel the fingers kind of hurting until, and to make the matte worse, strings are also thin, so imagine the pressure on the fingertips. Hence guitars are best for first-time players.

Both bass or standard guitars are larger than a mandolin virtually in every way. From thinner strings to the smaller neck, the mandolin is also easier to wrap the whole hand around the neck, and it’s hard to do the same to a guitar. It is impossible to reach every fret on a mandolin due to their smaller size, and you wonder why the designer added them all.

The guitar is still easier to play than a mandolin based on their size differences.

Tuning: Can You Tune a Mandolin Like a Guitar?

Guitars are tuned differently from a mandolin. You will realize that tuning a mandolin is like tuning to a reversed version of the four strings of a standard electric guitar; G-D-A-E.

When tuning a mandolin, each pair of the four courses is tuned to the same tune; G-G-D-D-A-A-E-E. Unlike in guitars, you translate the shapes of mandolin chords because they work out differently, yet you only have four strings to manipulate.

Tuning of a standard guitar expresses the pitches of string as E, A, D, G, and E.

Music Versatility: Are Guitar and Mandolin Chords The Same?

While we assume to play several styles of music with mandolin, they were is primarily designed for playing bluegrass, and classical, Irish music. This gives a mandolin player fewer genres of music to learn.

Guitars are the most versatile stringed instrument that can play so many genres and styles of music, especially the modern-day jazz, blues country, and others.

So a beginner with interest to play unlimited styles, the guitar is the best option and even to start learning first.

In most guitars, the bridge that supports strings holding them above the neck is fixed. This makes it easier and less complicating when replacing the strings.

Mandolins have floating bridges, such that when you want to replace the string, the bridge must fall because it is suspended. This is why replacing a mandolin needs some expertise and skills.

Replacement of the strings requires a proper balancing of the bridge else tat will corrupt the sound of your mandolin. For this reason, it poses some problematic situations to beginners, wasting time trying to fix or the whole system fails the apprentice completely.

The popularity of guitars makes them affordable, and in most western countries, out of 5 families, there is the probability you will find at least one guitar. Cost-effective nature guarantees that a beginner can access a guitar at less money.

Mandolins are not even half as popular as guitars; this makes them expensive, and worst if your instrument develops a technical problem, it’s hard to find a handyman to repair the faulty tool.

See the best mandolins for beginners.

Finding a mandolin teacher can be quite difficult, however, guitar trainers are almost everywhere. Therefore a guitar is the most favorite instrument to consider learning first as a beginner.

Learn how much mandolins cost here.

If you are confused on which instrument to start playing between guitar and mandolin, this contest will help reshuffle your mindset. However much we may sing or advise you here, your inner drive will take. However, if you have no idea or personal reasons, the guitar is an expert’s best suggestion.

Mandolinmasters.com is a participant in the Amazon Services LLC Associates Program, an affiliate advertising program designed to provide a means for us to earn fees by linking to Amazon.com and affiliated sites. As an Amazon Associate I earn from qualifying purchases. Amazon and the Amazon logo are trademarks of Amazon.com, Inc. or its affiliates.